About The Five Day Film School

Hi, I’m Jackson Kingsley. I'm here to help you create better videos, reach more people and make more money.
Since 2008 I’ve had an epic journey to get to where I am today. I feel privileged to have travelled the world making films for many of the biggest names in the industry, including Animal Planet, National Geographic, and Discovery. I’ve also been to film school and taken countless courses online and offline to refine my skills.
However, when I first started out it was a different story. Overwhelmed with information and no clue where to start, my first films were embarrassing at best. It took years of trial and error, blood, sweat, and tears to get to where I am today. It was a long ride, but I wouldn’t trade it for anything. Through this website I hope to share my experiences, mistakes, and lessons to help you become the filmmaker you were born to be.
I hope you find the content useful and I’d love to hear from you if you have any questions. Answers will be used to grow and expand the project – to the benefit of the whole community.

Learn with like-minded professionals and get weekly updates

Filmmaking is both a science and an art form. To succeed requires a high level of technical understanding, creative flare, and the ability to work well with others. What was previously a small and elite industry delivering strictly for broadcast television has now become a global phenomenon with the advent of Youtube and DSLR cameras.

When I first started out as an assistant on feature films over 15 years ago the old boys used to play tricks on the newcomers, asking for bits of kit that didn’t really exist. It turned out that ‘sausages’ were floor markers for the actors, but the ‘multi coloured paint’ and ‘whippets’ were made up. I remember sneaking behind a camera truck on one of my first jobs to ask Google what a doughnut is (it goes between a lens and matte box to block out light). I learnt a great deal about film production working on big sets, seeing what could be done with unlimited budgets. However when you’re working in a team of over 100 people as an assistant you don’t really have any creative input. I had set out on my journey to make films, not just swing lenses.

Googling ‘career advice’ in film production wasn’t proving any more fruitful than ‘doughnuts’. Wanting to make films, I signed up for film school. Tens of thousands of pounds and 3 years later I came away with even more questions than I’d gone in with. The resources available were either too dry, impractical, or years out of date. I felt bankrupt, creatively and financially. What I needed back then was a guide, a one-stop-shop that would give me a framework to follow and make real progress.

I created this website to provide just that. Fifteen years of filmmaking later I feel privileged to have traveled the world making films for most of the major broadcasters and learnt from hundreds of exceptionally talented professionals. Condensing my knowledge and experiences into these articles I aim to save you a lot of the blood, sweat, and tears that I endured along the way. I can’t promise you wont make mistakes, in fact I encourage them as the best way to learn. Instead I offer you a head start with these practical how-to guides, filled with tips and tricks so you don’t have to sneak behind the camera truck searching Google for the baby legs and the blondes.

Great storytelling is not limited by the size of your budget. Ideas, creativity, and imagination are all products of the mind.

When I first set out on this journey, I started with just one question. The answers that followed shape every decision that’s made here at the Five Day Film School.

Up to date knowledge and resources following industry trends and tech.
Accessible to everyone with the option to learn many things for free.
Pay as you go but also exclusive benefits for those more serious members.
An open platform where people can discuss the content, ask questions, and get feedback on their own work as well.

Feel free to get started by looking at the most recent posts or selecting a part of production that interests you most. We’d love to hear from you so please send any questions or comments to director@fivedayfilm.com.

THE ULTIMATE GUIDE TO VIDEO PRODUCTION

A comprehensive quick-start guide for aspiring film and video creators. LEARN professional techniques from script to screen and ELEVATE your production values like never before. 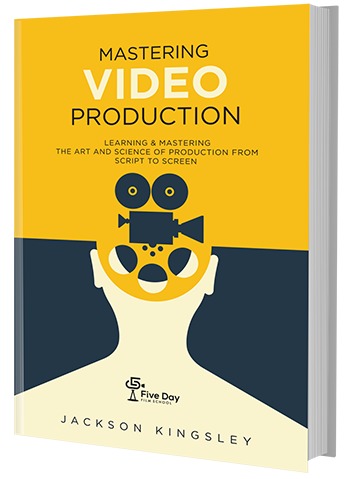